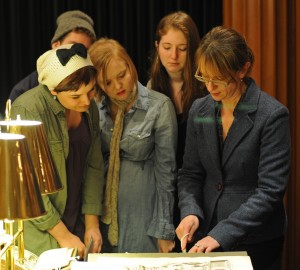 Her research has been supported by the Center for the Humanities at Wesleyan University, an International Research Fellowship at Oxford Brookes University, an Andrew W. Mellon Foundation Fellowship at the Huntington Library, a Charles S. Singleton Fellowship at Johns Hopkins University’s Villa Spelman, and fellowships at the Folger Shakespeare Library. She has served on the editorial boards of Renaissance Quarterly, Early Modern Women: An Interdisciplinary Journal and The Stanford Global Shakespeare Encyclopedia, on executive committees of the Modern Language Association and the Renaissance Society of America, and is a member of the Theater Without Borders research collaborative. In 2012 she was invited by the Folger Institute to teach an intensive graduate seminar on “Mastering Research Methods at the Folger.” After being elected to the Board of Trustees of the Shakespeare Association of America in 2015, appointed Chair of its 2016 Program Committee and 2017 Nominating Committee, she was elected Vice-President of that organization in 2019, and will serve as its President in 2020-2021.